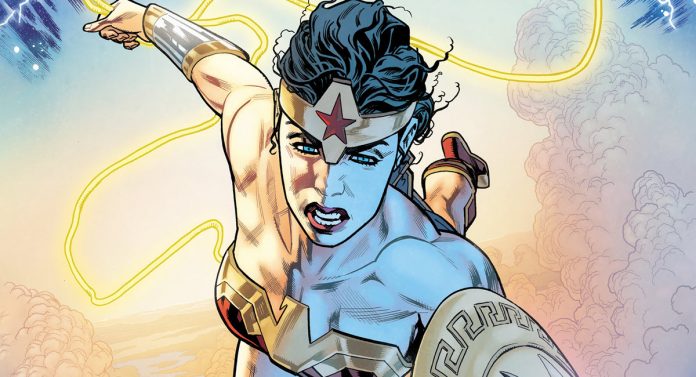 DC may be celebrating Wonder Woman’s 80th anniversary in October, but the spotlight on the amazing Amazon doesn’t end there. The publisher today announced Wonder Woman: Evolution, a new eight-issue series written by Stephanie Phillips, pencilled by Mike Hawthorne, inked by Adriano Di Benedetto, colored by Jordie Bellaire, and lettered by Tom Napolitano that will launch in November. The series finds Wonder Woman facing off with a cosmic tribunal for the fate of humanity.

In an interview with Newsarama announcing the project, Phillips described the forces Diana will find herself up against, and what she plans to explore in the series:

“Their job is to keep all the various planets and species in check – when one gets a little too far out of line and poses a threat, they intervene. At the moment, they see humanity as posing a potential threat not just to Earth itself, but to the cosmos. The story will explore how they serve to make their decision about humanity and why Diana is the chosen proxy.

Wonder Woman: Evolution is the latest Wonder Woman project for Phillips, who previously wrote a two-part story teaming Diana with Hawkgirl in the Sensational Wonder Woman anthology series. Phillips is also the writer of DC’s Harley Quinn ongoing series illustrated by Riley Rossmo, who provides the variant cover seen below for Evolution #1. The series is the first teaming between Phillips and Mike Hawthorne, whose most recent work has been on Marvel’s Daredevil series.

Look for the first issue of Wonder Woman: Evolution in stores in November.