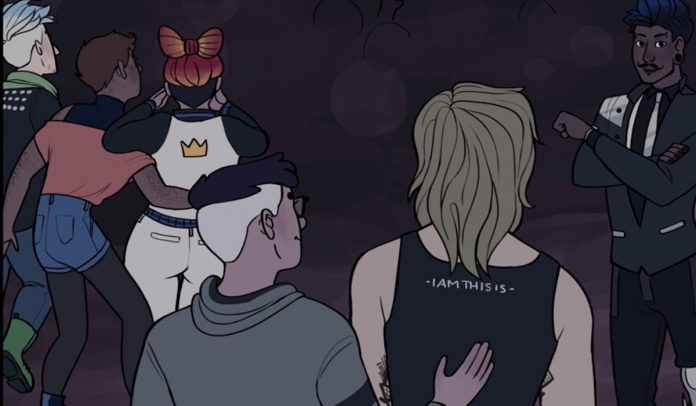 In Rechargeable by Bilvy, readers will be introduced to the Immortals, a street gang trying to scrape by in New Portland, a seedy city in a futuristic version of Australia.

Featuring a mixture of interesting character dynamics, futuristic technology, and “Australian levels of swearing,” this webcomic is sure to seize your attention and refuse to let it go.

In New Portland, CHIPs (that’s Cybernetic Hardware, Implants and Prosthetics) are illegal, having been banned in 2086 in light of the fact that such augmentations have the potential to become weaponized. However, they offer all sorts of other potential benefits, as well, including the ability to shift one’s appearance at the drop of a hat (a useful technique when you’re moving drugs at the club).

One member of the crew, The Sandman, is especially adroit at creating CHIPs from scratch… and this talent soon attracts the attention of The Scarecrow, another local criminal. In short order, an offer for the two crews to work together is issued, based on the talents of the modder…

With an interested world filled with fascinating technology (and lots of complicated character dynamics), Rechargeable is an engaging comic that digs into the mechanics of the world just as thoroughly as it examines the relationships between the characters.

If you’d prefer, you can also read Rechargeable on Webtoon.

You can support Bilvy directly by purchasing something from his webstore.

And you can keep up with all of the latest updates to Rechargeable by following Bilvy on Twitter.

Have you had a chance to check out Rechargeable? What did you think? The Beat wants to hear from you! Give us a shout-out in the comment section or over on social media @comicsbeat.

And if you’re looking for more free comics, there are hundreds of comics waiting for you in our A Year of Free Comics archive!