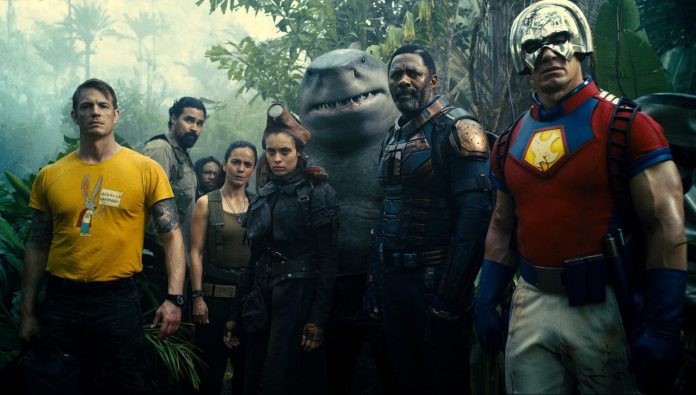 James Gunn’s The Suicide Squad is the rare first in a cluttered superhero landscape. Most immediately, it’s the first time we’ve seen a comic book-based “do-over” from a previous film, but with a handful of the same core cast. It’s an unusual approach and feels a bit like Warners didn’t want to toss what David Ayer did whole-hog, but also didn’t want him involved going forward. In a way, that makes sense, as the first Suicide Squad was a huge money-maker, but received very poorly by critics (me included).

It also can’t go unremarked that in the lead-up to that first film, the marketing was clearly trying to sell it as DC’s answer to Guardians of the Galaxy. With this “soft reboot”, they went straight to the source and hired Gunn to fully deliver that promise.

Gunn is an interesting filmmaker, a product of the Troma splatter and gore school turned mainstream. And his Guardians films, especially the second one, are among the only MCU entries I ever want to just put on and “vibe with” as the kids say. Not flawless features by any means, but they have a tangible imprint, which compared to something like the duller than dirt Black Widow, goes a long way. He’s also clearly really into the source material. To know that he’s a massive fan of the original John Ostrander/Kim Yale/Luke McDonnell run of Suicide Squad goes a long way. It’s one of the greatest runs of DC’s greatest period, and probably one of the top 5 concepts in all of adventure comics.

Gunn’s take on the Suicide Squad, now called THE Suicide Squad, befitting the odd nature of the project’s origins, is deeply indebted to the initial arc of the comic. Dropping Ayer’s nu-metal veneer, the film firmly embraces The Dirty Dozen aesthetic that’s far more apropos for the franchise. We often hear lip service about how this superhero movie is really an “espionage thriller” or this other one is really a “heist movie”. It’s pretty much all bunk, but to the degree that the suffocating formula of these allow, Gunn and his crew have cooked up the closest thing we’ll probably get to a superhero war picture. And a subversive one at that, with just enough of an anti-imperialist message that falls out of step with the current de rigueur of running scripts by the Department of Defense.

The great challenge of reviewing this film is that almost anything I’d say would constitute a spoiler, even a plot synopsis slightly more detailed than bare bones. But just to crack the basic facts of the case: there’s been a coup on the island of Corto Maltese, and with the ruling family having been executed by the evil dictator Silvio Luna (Juan Diego Botto), Amanda Waller (Viola Davis) instructs Task Force X to infiltrate the island to destroy a secret base called Jotunheim. They break into two teams to invade the different coasts of Corto Maltese, with one team led by Rick Flag (Joel Kinnaman) that includes Harley Quinn (Margot Robbie), Captain Boomerang (Jai Courtney), Savant (Gunn recurring player Michael Rooker), and a slue of others. On the opposite side of the isle arrives Bloodsport (Idris Elba, playing Deadshot with the serial numbers rubbed off just enough), Peacemaker (John Cena), Ratcatcher 2 (Daniela Melchior), the Polka-Dot Man (David Dastmalchian), and King Shark (voiced by Sylvester Stallone).

Bloodshed and chaos ensue and the tagline of “don’t get attached” is definitely applicable throughout. For once, and maybe for the first time since the original comics, the Suicide Squad really does live up to its name.

What’s exciting about this second time at bat for the franchise is that it perfectly marries the two seemingly oppositional phases of Gunn’s filmmaking career. It’s big-budget entertainment of the highest order, though structured a lot better, and frankly cleverer, than many of its contemporaries, but it’s also quite a gorefest. Even if the language wasn’t salty throughout, the blood and guts would more than earn it the R-rating it’s tagged with. The Suicide Squad feels untethered to the four-quadrant mores of the current studio system, like Deadpool, but with a narrative that’s better constructed and a largely more appealing cast.

It even holds the rare distinction of getting better as it goes. With so many similar films buckling under their own weight before the inevitable white noise climax, the third act roll-out for The Suicide Squad is quite rousing, with a visually appealing threat, a few twists and turns, and the fulfillment of core character arcs that are established from the outset. The bones on this thing are so very solid.

So why don’t I love it? I wrestled with that question on the way home from our screening. It’s, without doubt, a good film, and an accomplished one, but its flaws glare a bit in reflection. For starters, the team itself has a “bland leader” problem. Between Bloodsport, Peacemaker, and Rick Flag, that’s just one too many alpha males dominating the running time, and there’s a reason there’s only one Leonardo and one Cyclops in their respective teams. Don’t get me wrong, I love Elba, and Cena’s Peacemaker is the real breakout of the film (they know it too, thus the HBO Max show that’s coming next year), but Flag probably could have stood to be sidelined just to rebalance things to the side of the scuzzy and villainous.

There’s also an overreliance on Ratcatcher 2 to carry the emotional weight of the film, focusing a good deal on the loss of her father, the original Ratcatcher, and the stand-in role that Bloodsport plays for her as a kind of new paternal figure. It doesn’t really work. Sentimentality is not one of Gunn’s strongest suits as a writer, and between that and an actress is that is the weakest link in the cast, those scenes fall very flat.

And while I hate to judge the movie I wanted vs. what I got, the film lacks a strong villain presence. Peter Capaldi’s The Thinker is fine, but he’s just a plot donkey and is pretty incidental to most of the mission. The big threat at the end has a lot going for it, but personality isn’t one of those things. I can’t help but feel like that’s one element that perhaps Gunn should have borrowed more from those early comics. Drop-in characters like Ravan, Jaculi, Manticore, etc and I think that would have added just enough color to offset some of the other issues that became more predominant.

Am I being too picky? Again, it’s a good film, but given the early raves, I was hoping to fall head over heels for it. Instead, I just stand mostly impressed with it as a feat of pushing the unimpregnable boundaries as far as they can go. Look, no matter what, it’s still in the top tier of DC movies (right there with Shazam! and Zack Snyder’s Justice League), and folks, that ain’t nothin’.

You can find more of Kyle Pinion’s reviews at ScreenRex