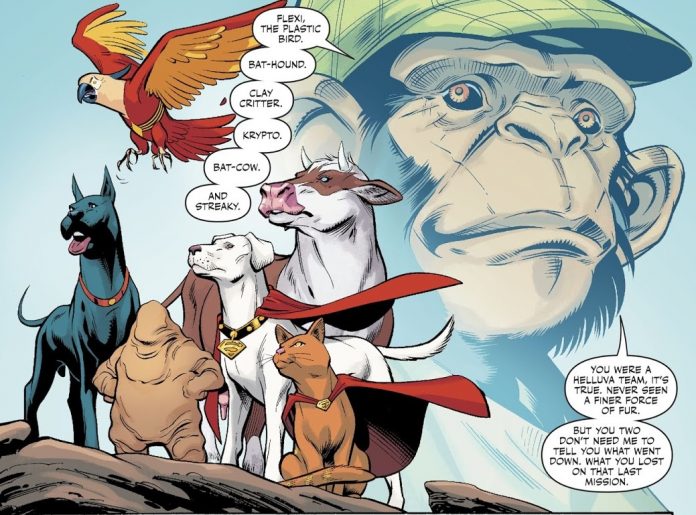 As you may have already figured out, I’m a big fan of superhero pets. And with Dwayne “The Rock” Johnson recently announced as the voice of Superman’s dog, Krypto in the upcoming DC’s League of Super-Pets animated feature film – easily my most anticipated superhero movie – now’s as good a time as any to dig into why superheroes with animal companions are such an endlessly appealing concept.

Let’s start with what should be more obvious than it apparently is for large swaths of superhero fandom: superheroes are effectively (or at least historically) a genre for children. I’ve written about this several times before, but it bears repeating: no matter how much “dark” “adult” takes seem to dominate comic book store shelves and the box office, and as much as many of those interpretations are genuinely brilliant, you can’t divorce superheroes from their roots as whimsical morality tales and juvenile power fantasies.  And whether a piece of superhero media is intentionally geared towards children or not, I believe kids will always be drawn to colorful costumed heroes regardless of how age-appropriate the specific material may be.

Long story short, kids love superheroes. And in my experience, with few exceptions, most kids love animals. When you’re a kid going to the zoo and you see a giraffe or a penguin or what-have-you for the first time, it really is a magical experience. They’re like fairytale characters come to life. And a lot of animals are cute! Kids like cute things. I don’t think that’s controversial.

There’s also an element of relatability that animals bring to the table when they become a superhero’s pet. It’s a similar principle as the appeal of kid sidekicks, like Robin to Batman or Aqualad to Aquaman. Superheroes aren’t just godlike beings who can effortlessly save the world from utter annihilation within the span of 20 staple-bound pages, but they’re usually grownups. So while young sidekicks serve as audience-identification characters, pets have a way of softening a superhero’s perceived edges.

Superman thrives on being an aspirational hero, and seeing him play with Krypto brings the Man of Steel charmingly down to Earth. Sure, most family dogs can’t fly or shoot lasers out of their eyes, but Krypto is Superman’s best friend, and that’s what kids relate to. Besides, plenty of kids fantasize about their pets secretly having fantastical powers or mysterious, mythic origins.

Superpets bring a reliable sense of whimsy to any story they appear in. That’s why I was so delighted to see Aquaman’s pet octopus, Topo, briefly appear in the 2018 film – as a drummer, no less! Sure, he’s onscreen for barely five seconds, but it’s the kind of silliness contemporary superhero fiction has been desperately lacking since the Silver Age, and I was overjoyed to get a taste of it in a big-budget blockbuster.

On that same token, I was disappointed by the lack of super-pets in the 2017 Wonder Woman film, as well as its bafflingly-misguided (for unrelated reasons) 2020 sequel, Wonder Woman 1984. It’s bad enough that we were denied Jumpa, Diana’s giant, rideable kangaroo who can jump (or fly, depending on one’s perspective) all the way to the moon. But as comics critic Chris Sims wrote years before that first film was released, Wonder Woman is “is quite literally a magical princess that can talk to animals.” Why on Earth would you make a Wonder Woman movie in which she doesn’t talk to animals?

Actually, it’s not that difficult to figure out. In fairness, the ability to talk to animals a la Dr. Doolittle or Eliza Thornberry is one of Wonder Woman’s lesser-known superpowers, and she only uses it occasionally in comics. Similarly, while almost the entire first act of the first film takes place on Themyscira, these days Jumpa seems to be too heavily associated with Diana’s origin to be a recurring member of her supporting cast.

But even with all that in mind, I can’t shake the feeling that Wonder Woman’s animal friendships would’ve been considered too silly and, let’s face it, girly for Warner Brothers execs intent on maintaining the perception of a “serious” “mature” superhero movie that boys and grownups could enjoy guilt-free. God forbid they make a Wonder Woman movie for little girls.

And let’s not forget that both Wonder Woman films were co-written by Geoff Johns, the man who made sure that his first issue of Aquaman – a character best known for talking to fish – included a scene in which the titular hero declared that he doesn’t talk to fish.

While we’re on the subject, surely I can’t be the only one who thinks it sucks that the Redwing of the Marvel Cinematic Universe is a non-sentient flying robot, rather than a literal falcon with whom Sam “The Falcon” Wilson shares a telepathic bond, like in the comics.

Regardless of age or gender, seeing a fictional character caring for an animal immediately makes them more likable. It’s a trick screenwriters pull all the time: if you see someone petting a dog or rescuing a cat in the opening shots of a movie, chances are, they’re going to be the protagonist. Supergirl and Nightwing are plenty likable already without Streaky the Supercat or Haley (A.K.A. Bitewing) the puppy, respectively, but their pets reinforce their appeal.

She has a name! Thanks to all who voted. Welcome Haley. You have a very big adventure ahead of you. pic.twitter.com/qeTWfqDeRi

Meanwhile, for a superhero like Batman known for his grim persona, Ace the Bathound proves that Bruce Wayne is still a big softie on the inside. That dynamic goes a step further with Black Bolt, the silent king of the Inhumans. With a dark, almost demonic-looking costume and a devastating sonic boom of a voice that renders him mostly mute, Black Bolt’s severe, intimidating presence could fool readers into assuming he’s a villain. But we know he’s not largely because of Lockjaw, his sweet, humongous teleporting space bulldog who likes hugs.

I’m trying to think of a superhero who couldn’t benefit from a pet and coming up empty. It’s tempting to share a few pet ideas I have for various existing superheroes, but I’ll keep them quiet on the off-chance that Marvel or DC ever wants to give me a shot at them someday. For now, let’s just leave it at this: pets bring warmth, compassion, and a sense of adventure into our lives. Superhero comics thrive off of the same things.