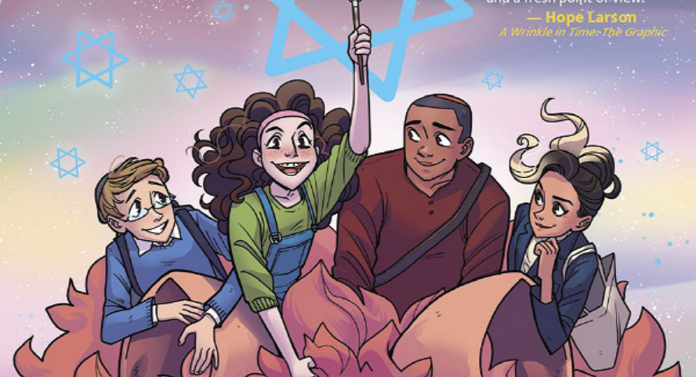 We are rounding out Wonderbound Week with The Unfinished Corner, an original graphic novel from Vault Comics’ young reader imprint Wonderbound. Written by Dani Colman, art is by Rachel “Tuna” Petrovicz and colors are from Whitney Cogar. Jim Campbell completes the creative team with letters.

Read the official synopsis from the publisher below:

“Twelve-year-old Miriam is full of questions, but the whole universe is counting on her for answers.

Jewish mythology has it that when God created the universe, one corner of it was left unfinished. Opinion is divided on why, but everyone agrees that the Unfinished Corner is a dangerous place full of monsters. Twelve-year-old Miriam neither knows nor cares about the Unfinished Corner. She’s too busy preparing for her Bat Mitzvah, wrestling with whether she even wants to be Jewish–until a peculiar angel appears, whisking her, her two best friends, and her worst frenemy off to this monstrous land with one mission: finish the Unfinished Corner. An original graphic novel!”

Colman said in a statement:

“Vault accepted the pitch for what would become The Unfinished Corner in July of 2017. Less than a month later, activist Heather Heyer was killed at a rally in which literal Neo-Nazis marched the streets of Charlottesville, chanting, ‘Jews will not replace us!’

A week before this book was announced to the world, an anti-Semitic murderer, gorged on a diet of hateful conspiracy theories, shot eleven people in a Pittsburgh synagogue, in the deadliest anti-Semitic attack on American soil in more than fifty years.

This is the world into which I’m bringing this book.

It’s a frightening time to be Jewish, and the sad thing is that I can’t really remember a time when it hasn’t been.  Even as a child, I remember the Jewish school in my neighbourhood having better security than some airports, and protesters doing their best to get in and cause harm regardless. To this day, the students at that school get to their classrooms every day through a crowd of people who hate them just for existing.

It doesn’t matter how religious you are or how wonderful your Jewish community: that kind of hate wears on you.  And, for the more secular kids, who don’t always define themselves by their Judaism or who haven’t yet figured out how big a place it has in their lives, it doesn’t paint a rosy picture of a future Jewish life.

I was lucky: I never really “looked” Jewish or found myself in places where anti-Semitism impacted me directly. Without that hate surrounding me, I learned to love my culture: the history, the scholarship, the music, the endlessly deep mythology and folklore. Judaism is a religion built on learning, on curiosity, on community, and on family.  When Vault gave me the chance to write a book inspired by Judaism, I knew that I wanted to create something that spoke to those things, and that could be a little reminder to its readers that there is so much to love about Judaism no matter the terrible things that hateful people chant in the street or spew online.

I hope very much that readers of all faiths love this book.  I don’t know that they will, but I hope that they do.

Here’s what I do know. I know, as certainly as I know that I have ten fingers and ten toes, that by writing an unapologetically Jewish book I am opening myself up to a world of hatred and hurt.  I can set my watch by how soon people are going to call me terrible names, wish me terrible things, and tell me my grandparents should have died in the Holocaust that these same people are somehow going to claim didn’t happen. I know this because I have watched it happen to Jewish writers, Jewish journalists, Jewish scientists, and Jewish anyones who have had the temerity to be proud of their heritage in public spaces.

But here’s what else I know. I know that story is a powerful force. I know that relatable characters and a gripping adventure have more strength than hate. I know that even the deepest-running prejudices can be drawn out and exorcised with a story so good you just have to know what happens, even if the characters are unfamiliar and the settings uncomfortable. And I know that every Jewish kid who has to deal every day with being unfairly blamed for the world’s ills also deserves to have stories that show them for the smart, curious, adventurous, and exciting people they are.

That’s who this book is for. For the Jewish kids who need heroes who look and act like them, and for the non-Jewish kids who need a counter-message to all the prejudice they can’t help but absorb. We’re all in this together, in the end. So, while I know it sucks out there for Jews and non-Jews alike, I hope this book brings people together and gives them joy, hope, and a desire to know more about each other and the heritage they hold dear. It’s worth being called almost anything for that.”

“I was approached to work with Dani Colman in December of 2019 on her fantasy epic The Unfinished Corner. An unprecedented adventure of Biblical proportions, tied up neatly in 220 pages for kids, and kids at heart, alike.

When I first read the script, each emotional moment connected precisely, and I found myself unable to put it down before devouring the entire thing! The lush characters expressing both the joy of adolescence and poignant self reflection in an age-appropriate manner elevate this story beyond its genre, beyond its plot and proper nouns. When I was a girl, it was exactly this type of tale that would drag me in and keep me in its universe for hours, long after I had finished reading.

Before my experience with The Unfinished Corner, the world of Jewish myth (and Biblical stories in general) was entirely foreign to me. Learning about it through Dani’s guidance, and my research, has been as rewarding as creating the art itself. The ambiguity of available visual reference allowed me to inject my own creativity and identity into the story – combining cartoonish inspirations and childhood preferences with the mysterious lore of an ancient world. The Unfinished Corner has been as much an educational experience for me as a creative one, and something I will carry with me for the rest of my life!

There’s nothing more valuable than expanding your worldview, and I am so grateful to have been a part of the team that put this amazing book together. I hope that both Jewish folk and gentiles will feel welcome to join Miri and her friends through myth and mayhem, and learn a little something about themselves, the world, and all the magic tucked away within it – for those willing to look.”

The Unfinished Corner is set to release on October 19. Take an exclusive look at a few preview pages here!