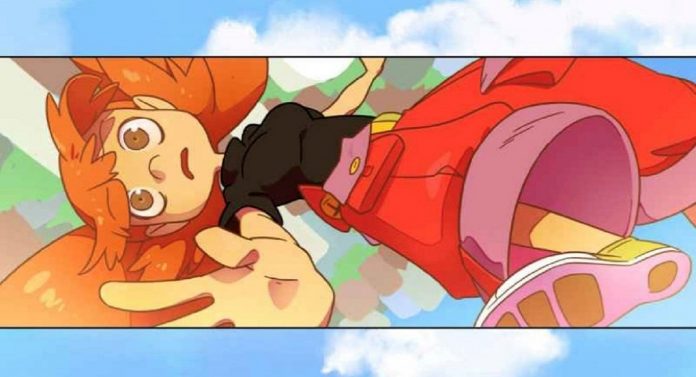 Lupe is having trouble fitting in. As someone who has never really adapted easily, going to a new school is daunting, which makes her retreat even further into her loneliness. But then she meets Lina and everything changes. In Four Leaf on Webtoons, Lupe is thrust into a world of magic and danger, and for a girl with zero magical capabilities, the world is even more unpredictable.

Created by Lumaga, the fantasy web series is a mixture of cute, colorful art, intriguing magical worlds and characters, and a little creepy mystery. Lupe is a sympathetic protagonist. We can all relate to feeling a little bit lonely and like an outsider, so when Lina appears there’s a sense of relief that Lupe has a buddy. Soon after, we learn there is much more to Lina than we originally thought, and as the episodes progress, more of her story unfolds.

The art is pretty and the colorful palette adds to the magical quality, especially when the not-magical Lupe finds herself in a world of witches, wolves, and hunters. Even though she may not have powers, will she finally find her purpose? And just how dangerous are her new friends?

Four Leaf has been running on Webtoons since 2018, offering plenty of episodes to dive into. New installments are scheduled every Friday. Begin reading here.

June 15, 20212 min read
In an article posted to the official Archie Comics website by Director of Publicity &…

June 15, 20213 min read
Batman: The Long Halloween, Part One, the animated adaptation of the acclaimed miniseries by Jeph…

Nintendo E3 Direct features new METROID, another peek at BREATH OF THE WILD 2, and remakes of classic titles

June 15, 20214 min read
While it was short on blockbuster announcements, Nintendo included a lot of fun surprises in…

DC ROUND-UP: SUPERGIRL – WOMAN OF TOMORROW looks great, but how does it read?

June 15, 20217 min read
THIS WEEK: Supergirl: Woman of Tomorrow #1 has arrived…in all its confounding beauty. Plus, Static Season One…

Ciano & Hixson team for CHILDREN OF THE WOODS at Dark Horse

Check out the MILESTONE RETURNS trailer