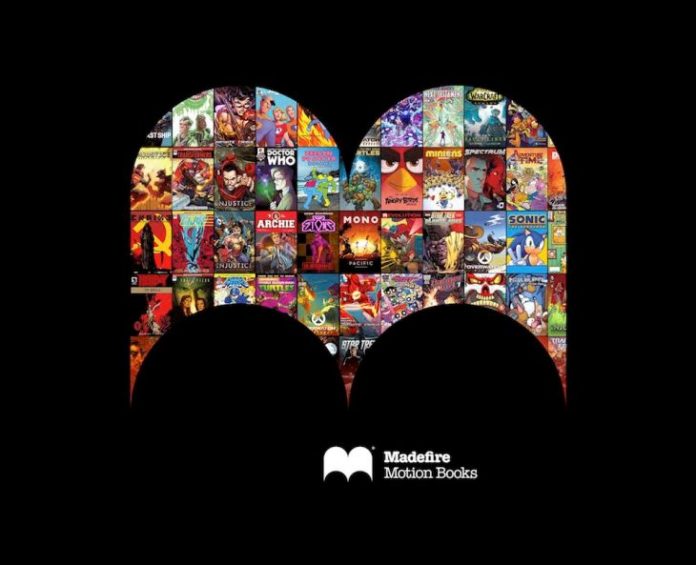 Madefire, a digital comics platform that launched with some fanfare in 2011, is quietly shutting down, leaving many purchases and apps powered by its technology in limbo. The company was founded by by Ben Wolstenholme, Liam Sharp and Eugene Walden. Sharp left for things like Green Lantern, but Wolstenholme stayed on to the end.

According to a notice on their website, the company has entered in an assignment for the benefit of creditors (ABC) a sort of soft bankruptcy. The announcement was made earlier this month, and purchasers of comes on their app have until the end of the month (Friday) to download them.

On April 7, 2021, Madefire, Inc. (the “Company” or “Madefire”) entered into an assignment for the benefit of creditors (the “Assignment”), which is a state-level insolvency proceeding similar to bankruptcy. Madefire made a general assignment of its assets to an assignment entity, a California limited liability company by the name of Madefire (assignment for the benefit of creditors), LLC (“Assignee”), an affiliate of Sherwood Partners, Inc.

Due to the uncertainty in this situation, the following actions have been taken:

Further information with regard to the process may be found on www.proofofclaims.com/Madefire.

The Madefire app powered several comics apps, leaving those stores in limbo as well. The Archie comics app shut down yesterday, on the 28th. In addition, they carried books by many publishers, including Boom and Scout – digital collections of these comics will be unavailable unless you download them now.

You can read a lot about Madefire’s history here at the Beat, including their splashy launch all the way back in 2012 that included comics by Sharp, Dave Gibbons, Bill Sienkiewicz and more.

The company debuted at the time when comics apps for the then-newish iPad were something of a goldrush for investors. Throughout its history, Madefire was a technology leader, offering “motion books,” a portal to upload your own comics and many other digital promotions (a partnership with Deviant Art, for instance, and later Magic Leap). They were (at least from an outside perspective) attempts to set up the platform for purchase by a larger entity – the classic Silicon Valley business plan. Although Madefire attempted to catch the eye of Apple or Microsoft some other tech giant…it never quite caught on.

Along the way, the raised a lot of capital. According to Crunchbase, they had $16.4 million in funding – but I’m told it was even more than that. Investors included disgraced actor Kevin Spacey and musical artist Drake.

In the end, digital comics reading via a dedicated app outside of Comixology (which was purchased by Amazon in 2016) and “motion comics” technology just never became a popular way to read comics. Meanwhile, the more open “Webtoon” type comics portal and its many competitors have millions of views a month.

Although the shut down has flown beneath the radar all month, a few people noted its passing on Twitter, mostly with cries of unanswered calls for tech support.

It’s not been almost a day and not a SINGLE other account has posted about @madefire going bankrupt. It’s the backbone of the IDW, Archie and Dark Horse comics apps.
Like, no @CBR article? https://t.co/HaXBl4d8SQ

Well i found that almost all my comics i purchased digitally on @madefire are gone because of them going bankrupt. I am unbelievably mad because i had YEARS worth of @boomstudios comics on there. Thats so shitty that Madefire didn’t let anyone know about this easily…

Archie Comics addressed the end of their app on their website and offered free comics to download via Comixology:

To our valued Archie App customers,

We regret to inform you that the Archie App will cease operations as of 4/28.

We realize this comes as a surprise and we are making every effort to do right by our loyal customer base. We sincerely apologize for this inconvenience.

With that in mind, we are working with our digital partners at ComiXology to offer you a free, one-month trial of their top-flight streaming platform, ComiXology Unlimited, where you can find our entire Archie digital library, day-and-date with its release. You will find almost every comic currently on the Archie App and more via this service, for a lower price than you paid for Archie Unlimited. To sign up, click here.

We are of course aware that many of you have made individual purchases via the app. To make up for the loss of those purchases, we are offering a free digital bundle of Archie Comics titles – including some of our best-selling collections. Some of the titles featured in this bundle include:

To redeem your download link, please email [email protected] (include the email you’ve registered with the Archie App) by June 1, and we will reply with a download link that includes the above titles and more.

If you have any questions, please let us know via the email address linked above.

Thank you for being a valued Archie Comics customer.

Also in limbo, all of the comics properties that Madefire launched, including some notable ones such as Mono by Wolstenholme and Sharp – Titan put out a print edition, but its “motion book” format now has no way to be viewed. Sherwood Partners, the Madefire assignee, appears to be a company that specializies in liquidation, and they have a whole bullet point about IP on their website.

In the end, many of the creators who worked with Madefire may have known it was rolling the dice on a payoff that never came.  I wrote many stories about Madefire over the years, and interviewed Wolstenholme many times, including on a (in retrospect) kind of end of an era panel at NYCC that also included Tom Akel, then head of Webtoon but soon to leave himself. Those involved with Madefire always seemed very sincere about loving comics – something that may not have translated very well to Silicon Valley investment games. Digital comics platforms have tried to play the start-up-to-acquisition game a few times, none with as big a footprint – or as doggedly – as Madefire. In the end, readers have spoken with their wallets and eyeballs: people prefer free comics, print comics and Amazon (Comixology).