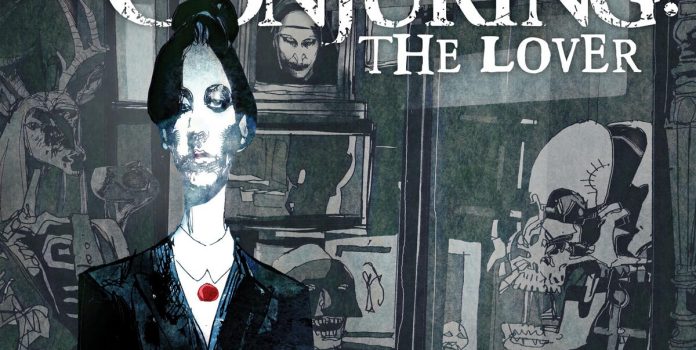 Synergy is back! DC Comics is launching a new DC Horror imprint this summer, and kicking things off with The Conjuring: The Lover. This five-issue mini-series is a prelude to film The Conjuring: The Devil Made Me Do It, the latest in the Conjuring franchise which hits theaters and HBO Max on June 4.

The new imprint will be rated 17+ and more titles will be announced in July for an October release. It’s a return to the horror genre for DC, as well as a tie-in to other WB owned series, in this case New Line’s horror films.

The Conjuring: The Lover come will be co-written by the film’s screenwriter David Leslie Johnson-McGoldrick and New York Times bestselling author Rex Ogle (Free Lunch, Death of Wolverine: Life After Logan, Teen Titans), with art by Garry Brown (Babyteeth) and colors by Chris Sotomayor. In excellent news, Bill Sienkiewicz provides the covers, with variants by Ryan Brown (Dark Nights: Death Metal), and a 1-in-25 “ratio” variant cover by Garry Brown. Additionally, each issue will include shorter tales of terror from well-known comics creators, including Scott Snyder and Denys Cowan.

The Conjuring film universe comprises eight films thus far, spinning out of the first Conjuring in 2013, which stars Patrick Wilson and Vera Farmiga as supernatural investigators., with each film being based on well-known real life cases.  The original film was directed by James Wan (now busy in the DCEU with Aquaman 2) and led to a follow-up, The Conjuring 2.  The Devil Made Me Do It is sort of a direct sequel to these two films, while the rest of the series has gone off into other titles, including Annabelle, The Nun and The Curse of La Llorona. Ya got all that?

Meanwhile, back at the comics, a DC Horror line continues a very long tradition of disturbing comics from DC. “From early titles like House of Mystery and House of Secrets to current series featuring Swamp Thing and John Constantine: Hellblazer, DC has always been the home of great horror comics and characters,” said Marie Javins, DC editor-in-chief in a statement. “DC HORROR continues this tradition with new frightening tales from both well-known and new storytellers that will keep fans spooked and entertained.”

As for the first release:

The Conjuring: The Lover expands the tragic story of Jessica, a college freshman returning to campus after winter break, bringing with her the anxieties of last semester’s poor grades, the awkwardness of facing a boy she wishes she’d never slept with, and an undeniably unnerving feeling of being watched.

Jessica soon comes to realize that something evil has made her its target, and it will not rest until it has her in its unholy grip. But why did this sinister presence set its sights on a seemingly normal college freshman?

This terrifying series will also feature backup stories that further explore the mysteries of the dreaded artifact room of Ed and Lorraine Warren from The Conjuring Universe. Issue #1 contains a bloodcurdling story exploring the frightening origin of one of the items from the Warrens’ haunted artifact room, written by comics superstar and Dark Nights: Death Metal mastermind Scott Snyder, with art by Denys Cowan (Hardware, The Question: The Deaths of Vic Sage). In issue #2, writer Che Grayson (Bitch Planet: Triple Feature) and artist Juan Ferreyra (Green Arrow) double down on the fear with another tale of a cursed item from the artifact room.

May 15, 20212 min read
Ah, the weekend. The perfect time to lock all the doors here at Stately Beat…

May 14, 20215 min read
It seems perennial Marvel villain Kang the Conqueror is having a busy summer this year.…

May 14, 20213 min read
Joan Jett‘s iconic debut album, Bad Reputation, celebrates its fortieth anniversary this year, as does her…

May 14, 20214 min read
Welcome to The Beat’s crowdfunding round-up: a collection of some of our favorite campaigns from…

May 14, 20216 min read
Credit: Netflix After four seasons, Castlevania has finally come to a conclusion and one that…

The Never-Ending Battle: THE ADVENTURES OF SUPERMAN #497

May 14, 20214 min read
The death of Superman draws nearer in The Adventures of Superman #497 as The Never-Ending Battle…

A Year of Free Comics: Explore the world of SACRIMONY

May 13, 20213 min read
This month is Asian Pacific American Heritage Month, and just this past week DC Comics…

First look and premiere date revealed for MASTERS OF THE UNIVERSE: REVELATION

May 13, 20214 min read
The newly announced lineup from Abrams ComicsArts for Fall 2021 (and beyond) has been unveiled,…

May 13, 20219 min read
Being the first of anything is an exciting prospect. There’s the thrill of forging a…