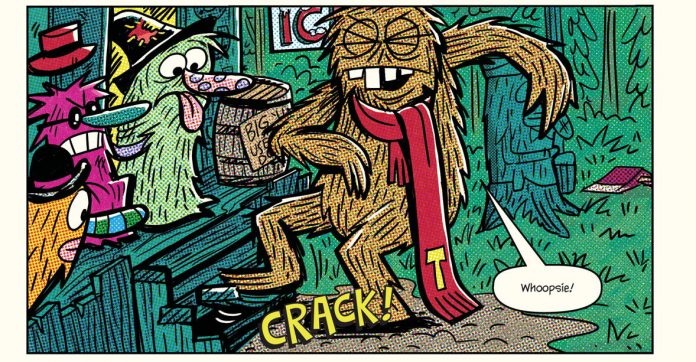 If you were a kid in the Aughts, or (more likely, let be real) had a kid in the Aughts, were probably obsessed with Yo Gabba Gabba, the colorful puppet/human collab that captured the playful spirit of the times. And now Parker Jacobs, one of the main creatives forces behind the show as art director, is back with a new graphic novel aimed at kids for the current times: Toobaloth Of Goon Holler.

Jacobs, who is also a former member of the cult band The Aquabats, both wrote and drew this tale of Toobaloth the Bigfoot, who becomes an unlikely hero to a troop of Goon Scouts. As you can see from the EXCLUSIVE three page preview supplied by publisher Z2 Comics below, the art is a very cool retro style, complete with the kind of pixilated color you find in older comics. We like!

The book is on sale from Z2 today, but will be released in print with an added soundtrack in August, in both comics shops and independent record stores.

From Parker Jacobs (Yo Gabba Gabba!) comes this tale of Toobaloth, an unlikely Bigfoot who gets roped into leading a troop of Goon scouts on a campout. On their way, they discover their beloved home, Goon Holler, might be under attack by aliens! Full of wacky characters fun adventures and great music, with an original soundtrack for music and comics fans of any age!

Z2 cofounder Sridhar Reddy says “Goon Holler is, for us, that welcome breath of fresh air. It’s been a pretty tough time for the world and we’re so glad we can welcome a story that is bright, fun and full of pure joy. While the book is meant for young readers it has also managed to melt our cold adult hearts; the music is super smart and you can’t help but get up and move. Parker (Jacobs) has given us the absolute perfect tonic for our enclosed, sedentary lives and opened up a new world full of sights, sounds and the real meaning of community and friendship. Goon Holler just might be the most timely book we’ve ever published.”