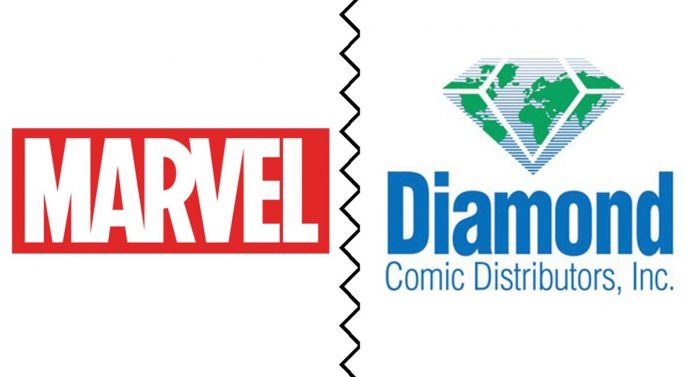 Well to say comics’ hot stove league is blazing fiery red like an Icelandic volcano right now is an understatement. The move by Marvel Comics to Penguin Random House Publisher Services for distribution to the direct market is a huge breaking story, so expect lots of updates – and more on Diamond’s reaction. But we’re beginning to get some details – and tons of speculation.

But amid the chaos, a picture emerges. I’ve been told by sources at PRHPS that as they take on the task of distributing weekly periodicals – a new business model for them – they are ramping up resources to meet the needs of this specific market and its retail accounts, including opening a new distribution facility, located in Hampstead, Maryland, which will be devoted to servicing the Comics Direct Market accounts.

(In case you are wondering, Hampstead is about 17 miles away from Diamond’s HQ in Cockeysville, MD.)

As they build out the supply chain for single issue comics, PRHPS is developing a portal for Direct Market accounts to view and order their comics, and “constructing a sales and shipping cycle that meets the unique needs of this channel.”

I also asked about how Diamond’s position as a wholesaler would work and was told that it’s an additional option/choice for retailers to order their Marvel titles. It’s similar to the way indie bookstores can choose to order direct from PRH or order from Ingram as a wholesaler. PRH supports both options.

PRH has also sent out a very thorough FAQ to retailers, which I’ll be summarizing below. But the overall message reassures the DM that PRH understands and respects them.

Penguin Random House aims to be the best distribution partner for the Direct Market. You are the epicenter for pop culture in your communities, and we want to better support all areas of your business. We will provide you with a top-notch supply chain, customer service support, and increase your access to our books, marketing & promotion campaigns, and publishers. The goal is to work together to grow your business and legacy.

Before we dive into the nitty gritty, some more bullet points of the biggest aspects of this – including some speculative analysis that everyone is talking about – clearly marked.

Finally, Boom’s retailer outreach lead Morgan Perry has a great Twitter thread for those who found all this tl;dr:

This is MAJOR. More-so than DC’s switch to Lunar, imo. Key takeaways are:

Comic Shops can still order Marvel Periodicals through Diamond, who is now a wholesaler supplied by PRH

Marvel collections/GNs will still be available through Hatchett

Having additional distribution methods isn’t a bad thing. Is it more work for comic shops? Yes. But independent bookstores have been working with multiple distributors for years. Having competition creates a need to develop better customer service practices, benefits, and terms.

This is going to change a lot things. How it changes them, we will have to wait and see. So free freight is on the table for retailers. What does this mean? Most comic shops will find this appealing as freight/shipping at other distributors has been a sticking point.  This could broaden the distro for periodicals to indie bookstores.

Also, please do not panic and freak out your LCS just yet. This new distro deal begins with October-Shipping books. There will be a lot of information for retailers to process in the next weeks/months as they potentially look into onboarding.

Once you get past the idea of retailer discomfort at new business workflow, and the problematic nature of big multinational corporations running everything (a big one, I know) here’s the thing: this could mean MORE comics sold in MORE outlets. Everywhere that sells books deals with PRH. Marvel books and periodicals will eventually have more outlets to be seen in. That’s why Marvel did this, in a nutshell.

Now some more information from the FAQ.

The website and accompanying catalog will include information on new and upcoming titles, sneak peeks, a listing of top-selling titles, and more. As a retailer, you will also be able to preorder, reorder, and check the status of existing orders for comics, graphic novels, and manga from Penguin Random House.

Finally, PRH included a “sales pitch” of sorts in their FAQ which seems appropriate to quote, since it goes to the heart of their commitment to the DM:

Penguin Random House aims to be the best distribution partner for the comic book market. You, as a comic book retailer, are the epicenter for pop culture in your community and PRH wants to better support all areas of your business. In addition to giving you access to an industry-leading supply chain and dedicated customer service support, PRH will increase your access to their books, publishers, and marketing and promotion campaigns.

PRH believes in the power of brick-and-mortar retailers and knows they are a vital part of a healthy retail ecosystem. At a time when many publishers divested their commitment to physical supply chain, PRH has doubled down on investment. There will be a designated warehouse for comic book distribution and new shipping cartons specifically designed for comic books. PRH is also creating an online retailer site with access to a monthly catalog of upcoming comics, graphic novels, and manga that can be purchased through the portal. The website and accompanying catalog will include information on new and upcoming features, sneak peeks, a listing of top-selling titles, and more.

PRH is committed to not just maintaining a presence in brick-and-mortar retailers, but to driving continued growth to your stores. The ongoing mission is to partner with you to grow your business and legacy.

When you open an account with Penguin Random House, you are getting:

Okay, that’s the facts for now! Look for more retailer and industry reaction in the days to come!