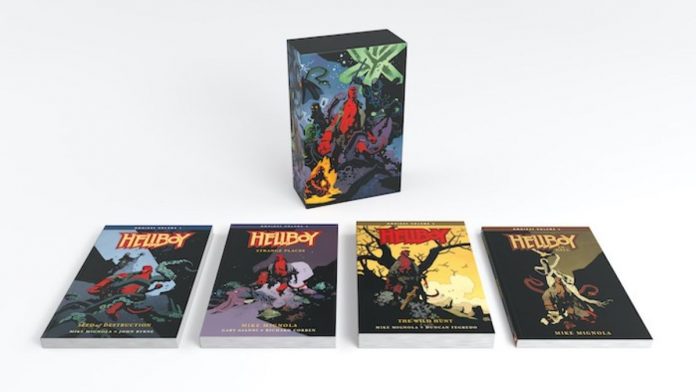 Dark Horse Comics has announced a complete boxed set of Hellboy omnibuses. The Hellboy omnibus boxed set slipcase will have have a wraparound art piece by creator Mike Mignola and colorist Dave Stewart. Dark Horse also announced a limited rerelease of the much in-demand Hellboy: His Life and Times art print.

The Hellboy Omnibus Collection boxed set will include the four previously released omnibus collections of the main Hellboy series – Seed of Destruction, Strange Places, The Wild Hunt, and Hellboy in Hell. These carry the titular hero’s story from his 1994 beginning to 2016 end. Around 1600 pages of comics content, all told.

The Hellboy Omnibus Collection boxed set will set you back $99.96 and will be available from comic shops September 29, followed by book stores October 12.

“It is kind of exciting to see those four books in one big, heavy lump,” Mike Mignola told Forbes Entertainment. “It’s a body of work I’m pretty proud of, and it’s right to have them all together like that.”

Dark Horse editor Katii O’Brien said, “The box set makes [for] a great gift and is such a perfect presentation of the four main Hellboy books.”

The Hellboy: His Life and Times 24”x18” artist line art edition, according to the Dark Horse press release, will return “due to incredible fan response”. The original release was in full colour but the new edition will be of the original Mike Mignola line art exclusively. The colour image is being used for the Hellboy omnibus slipcase. It became available as a limited edition print (of a run of 300) on 15 March and sold out.

The Hellboy: His Life and Times line art print will only be available for preorder until April 1 from Dark Horse Direct, at 5pm PST. Once pre-orders close the fine art print is expected to be shipped in May. It will not be reproduced. It will cost $49.99 and orders will be capped to no more than two per person.

“Hellboy: His Life and Times Artist Line Art Edition takes you on a visual journey, capturing some of the most memorable moments from Seed of Destruction through Hellboy in Hell. This is a perfect display piece for any Hellboy fan’s collection.”

In related news, the Mike Mignola documentary Kickstarter, Drawing Monsters, is in its final days. It has accrued over $400,000 in pledges already – nearly seven times its original funding goal. It will end on Wednesday (March 31). Don’t forget to pledge if you are still thinking about it.