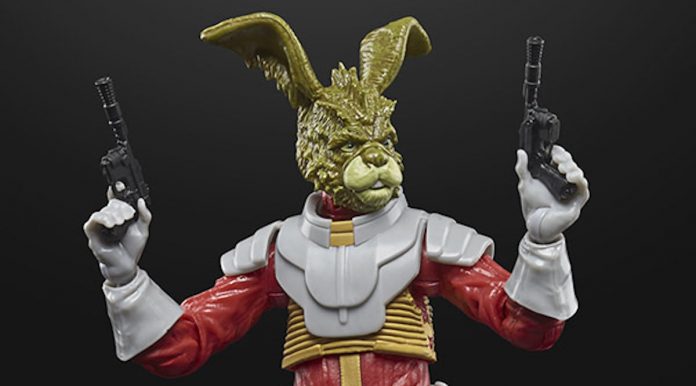 In honor of Lucasfilm’s 50th Anniversary, Hasbro’s Black Series line is adding four figures inspired by characters from books and comics that were released throughout the company’s history (yes, Legends devotees, you are being served). And perhaps most importantly: the release includes Jaxxon!

Jaxxon was created by
Roy Thomas and
Howard Chaykin for Marvel Comics in the 1970s for
Star Wars #8 (1978) by Thomas, Chaykin,
Tom Palmer, and
J. Costanza.

In more recent years, the fan favorite space rabbit has appeared in current continuity thanks to an appearance in “Hare-Brained Scheme,” a story by Cavan Scott, Mauricet, Tom B. Long, and Charlie Kirchoff in the Star Wars Adventures Annual (2019).

This round of figures also includes a Luke Skywalker – inspired by the 1995 comic book adaptation by Mike Baron, Olivier Vatine, Fred Blanchard, Isabelle Rabarot, and Ellie de Ville of Timothy Zahn’s 1991 novel Star Wars: Heir to the Empire, the first book in the Legends Thrawn trilogy. This figure comes packaged with a Force-blocking ysalamiri, a creature that plays an important role in the trilogy.

One of the all-stars of the prequel trilogy will be appearing as well: the version of Darth Maul that appeared in the 2000 comic
Star Wars: Darth Maul by
Ron Marz,
Jan Duursema,
Rick Magyar,
Dave McCaig,
Drew Struzan, and
Steve Dutro. In this comic, set before
Episode I – The Phantom Menace, readers explored Maul’s Sith training, and got to see the Dathomirian bare-chested (see: figure).

The final figure in this release is Carnor Jax from the 1997 Star Wars: Crimson Empire comic miniseries by Mike Richardson, Randy Stradley, Paul Gulacy, P. Craig Russell, Sean Konot, and Dave Stewart, released by Dark Horse Comics. Based on the design of the Imperial Guards from Episode VI – Return of the Jedi, the Jax figure is an opportunity to see one of the fearsome looking guards in a more active position.

Will you be heading to your local cantina and selling some death sticks to shore up the money for your own Jaxxon figure? Which Legends character do you hope gets a Black Series Figure next (and why is it Tenel Ka Djo of the Young Jedi Knights series by Kevin J. Anderson and Rebecca Moesta)? Let The Beat know in the comment section or on social media @comicsbeat!