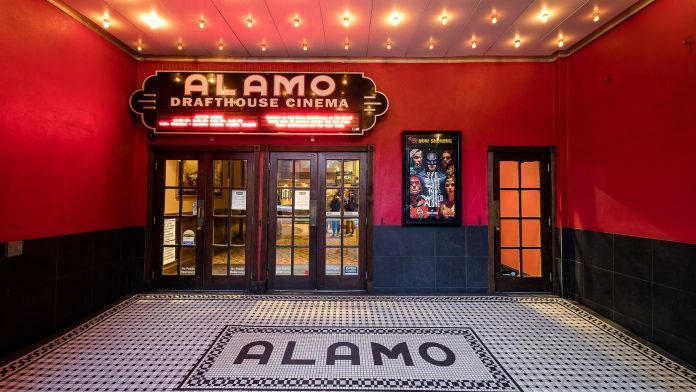 The Alamo Drafthouse franchise has long been a home for cinephiles and casual moviegoers alike. A chain with a strict no-noisemaking and cell phone policy and food and drink served, the various Drafthouses established themselves as a fun spot for enjoying the movies. They hosted Rowdy Cats screenings just before the start of the pandemic. And, like so many movie theater chains and franchises, as well as independent film theaters, they’re struggling during this pandemic. It was announced on Wednesday that Alamo Drafthouse was filing for Chapter 11 bankruptcy, as a result of a sale to Altamont Capital and Fortress Investment.

This, does not, however, mean the end of Alamo Drafthouse, thank goodness—for now, at least. While we all know the market is volatile for movie theaters, the fact that there are willing investors to keep it alive is promising. Admittedly, Alamo Drafthouse is a much smaller chain than say, AMC or Regal, but that should make its odds more challenging.

But this isn’t a column about business affairs, because, frankly, I still don’t quite understand this story. I wasn’t a finance major. But what I am is a lover of film, a fan of movies, and a formerly frequent patron of the Alamo. It was announced that their Ritz location on 6th Street in Austin, TX would be closing, one of only three that would be doing so. This is heartbreaking to me; I have a fond memory of going into this historic if refurbished, theatre with a dear former friend to watch Baby Driver in 2017 during a visit to a convention. The Ritz was also their oldest original location.

I also have fond memories of visiting the Brooklyn location many, many times during my time in New York, including making a special trip to go to their Heathers movie party, a film with which I have a loving relationship. They served Corn Nuts, gave out mugs with a special “drain cleaner” cocktail, and for movie parties only, allowed the audience to yell favorite lines and dialogue at the screen. They also screened many cult movies, as well as arthouse films and major blockbusters.

Alamo Drafthouse hasn’t been without controversy in recent years—with multiple founders of the franchise’s organization being accused of sexual harassment, and Splinter publishing an exposé on the mistreatment of employees by customers and management, which is well worth a read. A Kansas City publication, The Pitch, also published an article just last August that outlined similar concerns still occurring at that city’s location. That location is also closing. Coincidence?

I hesitate to speculate that changing hands will make Alamo Drafthouse become a better company for employees—rarely does making any brand more corporate make a company more progressive—if anything, things like sexual harassment just get more easily swept under the rug. But I hope Alamo survives this latest storm. There’s no place quite like it to watch movies, and as movie theaters struggle to keep their heads above water, it would be nice if at least a few chains, as well as many independent cinemas, get a second chance at life.

April 16, 20216 min read
The Beat’s Gregory Paul Silber has been accused of having a bit of an… obsessive personality. Each…