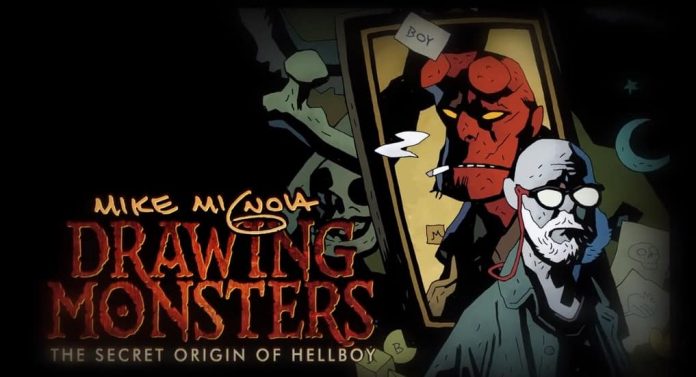 The documentary Mike Mignola: Drawing Monsters was launched on Kickstarter just yesterday. As of this writing, the crowdfunding campaign has made over $175,000, well over three times its $58,000 initial funding goal.

In an update post on the Kickstarter, co-director/co-producer Jim Demonakos wrote:

“That was one heck of a first 24 hours! Wow! Now over 1,000 backers? Kickstarter even gave us a thumbs up by making Mike Mignola: Drawing Monsters a “Project We Love”. We are so grateful, what else can we say but: THANK YOU, THANK YOU, THANK YOU!!”

As if the financial success of the campaign wasn’t enough for one day, Entertainment Weekly got the scoop on an anecdote from the documentary by Neil Gaiman, one of the many creators interviewed for the film. Gaiman’s story reveals the hidden role he played in the making of the Guillermo Del Toro-directed Hellboy 2: The Golden Army:

My only little Hellboy thing, uncredited, is that back in 2007, I was in Budapest where they were filming Hellboy 2 and I got to hang out on set and just watch the filming and learn. None of which I thought at the time was incredibly useful and all of which when I became a showrunner a decade later, became incredibly useful. But. Guillermo Del Toro at some point in there handed me the script for Hellboy 2 and said, can you make the fairy tale that it opens up with sound more like a fairy tale? I’ve written a fairy tale, but can you just can you do the language? And so I got to do a rewrite on that opening fairy story in Hellboy 2 and it gives me an enormous amount of pleasure to know that I sort of cracked in. I’m in there some way you can hear little turns of phrase.

Mike Mignola: Drawing Monsters is currently in production with a planned release of Spring 2022. Stately Beat Manor interviewed the filmmakers on the project just after it launched yesterday. The documentary is co-directed and produced by Jim Demonakos and Kevin Hanna and will look at the career of Mike Mignola as well as the creative influences that led to the emergence and continued development of the Hellboy character and his world.

A devilishly fancy cast of interviews are already announced with the likes of Gaiman, actor Doug Jones, Dark Horse owner/founder Mike Richardson, and Executive Grand Poobah (formally pronounced ‘executive vice president and creative director’) of Marvel Entertainment Joe Quesada will accompany those of the myriad artists and writers which have helped Mignola expand on the world of Hellboy.

Hellboy is a world-saving butt-kicking hyphen-attracting half-demon brought to Earth by occult Nazis as a child to herald the apocalypse. Saved and adopted by the US military and Professor Trevor Bruttenholm, he is trained to fight the extraordinary alongside other misfits in the Bureau for Paranormal Research and Defence (BPRD) before a change of heart had him going his own way and enabling a BPRD spin-off title that ran until 2019.

The Hellboy-verse continues to tell new stories despite the strict chronology coming to an end with the finale of BPRD: The Devil You Know in April 2019. New Hellboy stories are still being told that fill in the decades of story time that remain unrecounted.

Hellboy has also been adapted into animated and live-action movies, most notably two films by Oscar-winning director Del Toro in 2004 and 2008. A recent reboot movie directed by Neil Marshall in 2019 but was poorly reviewed and bombed at the box office.